This Week: Meet Jean Boone, a new member on the VPA board of directors 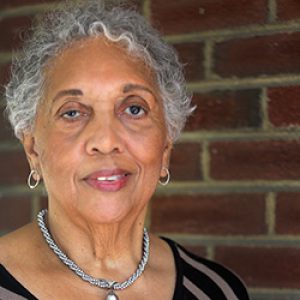 Jean Patterson Boone is the publisher of the Richmond Free Press since June 2014 and president of the board of directors of Paradigm Communications Inc., its parent company. She was appointed to these positions by the Paradigm Communications board upon the June 3, 2014 death of her husband and company founder, Raymond H. Boone.

In 2004, she received the YWCA’s Outstanding Woman of the Year Award for Communications.

Boone served as one of three co-chairs of the inauguration Committee for Mayor Dwight C. Jones and as a member of the mayor’s inaugural committee for Gov.-Mayor L. Douglas Wilder and on the Transition Team for Gov. Tim Kaine. She was an adviser to L. Douglas Wilder, and in 1976, served as Gov. Wilder’s first Committee Clerk when he became the first African-American to serve as a chair of a Standing Committee in the Virginia Senate.

Boone taught at Virginia Commonwealth University and the University of Richmond. From 1981 to 1989 she served as director of state and local affairs for the Washington, D.C. based-Children’s Defense Fund. She also served as director of Baltimore Blueprint, a federal, state and city partnership initiated by then-Mayor William Donald Schaefer. Her work on inclusivity as manager of community affairs and marketing for the Baltimore Symphony Orchestra won national recognition.

New
Favorite
December 8, 2022, 1:00 pm
-
2:00 pm
Dec. 8 at 1 p.m. – Newspapers invented first-party data. Yet, many publishers lack a first-party data strategy and an actionable 360-degree customer view. This webinar will cover: How to leverage the first-party data you already have Actioning behavioral intent and content insights to increase new subscribers, renewals and sign ups Understanding and knowing the “WHO” is the key ingredient Read more...

Virtual VPA Day in the Capital 2022

New
Favorite
December 8, 2022, 9:00 pm
-
11:30 am
To register for either session, click the flyer image below to download a clickable pdf — then register by clicking on the corresponding red registration buttons) Read more...